Deer rutting season takes place in this time of the year and therefore feeding and approaching our fallow deer is strictly prohibited, for everyone's safety. Thank you for treating our animals respectfully. 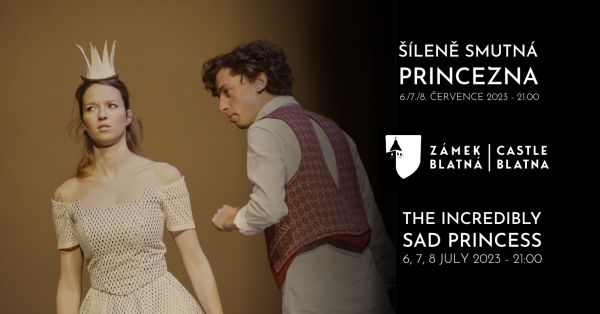 Visit the page of this event

Do you know The Incredibly Sad Princess? It's one of the most popular Czech fairy tales, which was also filmed at our castle.

We are therefore delighted to announce that a theatrical production of the film shall be coming to Castle Blatna on 6, 7 and 8 July, presented by the Studio DVA theatre company. The director of this beautiful performance is Šimon Caban, and the orchestral arrangement and theatrical staging is under the direction of Kryštof Marek.

Don't miss this unique adaptation of the legendary musical film, which has been loved by audiences for several generations. The story of a prince and princess from neighbouring countries who are to marry at the request of their fathers and their advisors, but decide to choose their own partners.

You can look forward to great actors, such as Berenika Kohoutová, Jan Cina, Oldřich Navrátil, Bohumil Klepl and many more!

GET YOUR TICKET NOW